“You really have to think about the future.” I’m backstage on the main stage of the Haldern Pop festival, talking to one of the production team members. We both agree that this infernal heat could start to characterize the next editions. Where once participants slid through the mud of the traditionally fertile Rhine basin, they now kick up clouds of dust. The heat is intense: festival-goers hide in what shade there is; a group of people stand in the shadow of the huge construction that houses the sound engineers directly in front of the stage, pausing for the barriers as the next act turns up the noise. 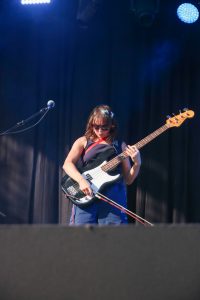 Heat will be the imperious memory of Haldern Pop 2022. A heavy and omnipresent element that almost stifles the acts in the Niederrhein tent, bakes the cobblestones in front of the village stage and turns the Spiegelzelt into a shimmering sweat box. Sometimes the groups feel dazzled by the glare of the sun; Luke of Black country, new road later admits to having never been so affected by the heat on a stage. The sun dazzles BC,NR like the all-seeing eye of Sauron.

Certain acts suit this implacable Anthropocene gaze: playing on a sultry Saturday afternoon, horse lords install a powerful drone that opens a third eye to many; their gloriously ancient noise slips from the main stage and seeps through the woods that line the festival grounds. Ghoum wow in the Spiegelzelt on Friday, with the London quartet proving to be a fabulously tight outfit whose gnomic music also feels like something vital is being conveyed. Think about it: impossibly taut guitar lines over a throbbing rhythm section and alternate intelligences doled out by the singer, what more could you ask for from a rock and roll band?

Following, Gustav surprises viewers with a colorful and clever set, a kind of wyrd mix of Devo, speakeasy sleaze and Thespian devil-may-care; the singer vamping for all she’s worth above a brilliant rhythm section. Then there is Gilla Group, who may have played the weekend gig on Friday night. One of many Irish artists headlining the festival, Gilla Band create an arid soundscape with barely a sight of water in a blisteringly hot Spiegelzelt. The crash and grind of their guitar onslaught hits viewers, sometimes it sounds like a live version of Metal Machine Music, with the lyrics teleported from an alien spaceship. When the band gives in and gives us something to remember in terms of a melodic twist or a riff to surf on, the tent explodes. They are a wonderful live act.

Haldern always reserved the eccentrics and the visionaries, often to offend those who came mainly for the headliners. The festival has also regularly sought to take a risk with acts that might be seen by many as surprising iterations of pop. This year sees another dismantling of old assumptions about what we should expect from the medium. Sassy and assured ensembles by Son of Kemet and Anna Calvi please, of course, how could they not; but sometimes other unique intelligences take the audience elsewhere. Nilufer Yanyathe band knocks out a brilliant gig; aptly showcasing her fabulous multi-faceted pop music: she truly has a rare talent. For their part, WU-LU chart a moody course to the third eye with a rugged yet roomy ensemble that perfectly captures the shimmering, dissonant drowsiness of a hot afternoon. However, perhaps the best example of what pop can do is Kae Storm, whose headlining show is a triumph of empathy, insight and anger in equal measure. Stuff that defines Zeitgeist.

Much-heralded UK artists Squid, Black Midi and Black Country, New Road show all their assets over the weekend. Squid play a committed set in the Spiegelzelt on Friday evening that goes in all directions except the one the public expects: it is certainly committed, perhaps complicated, and sometimes convoluted. And some members of the group are apparently struggling to stay on their feet, such is the feeling of excitement. I can’t say I understand them, but they really struck a chord with a lot; they have bottled something of this disconcerting zeitgeist we live in. 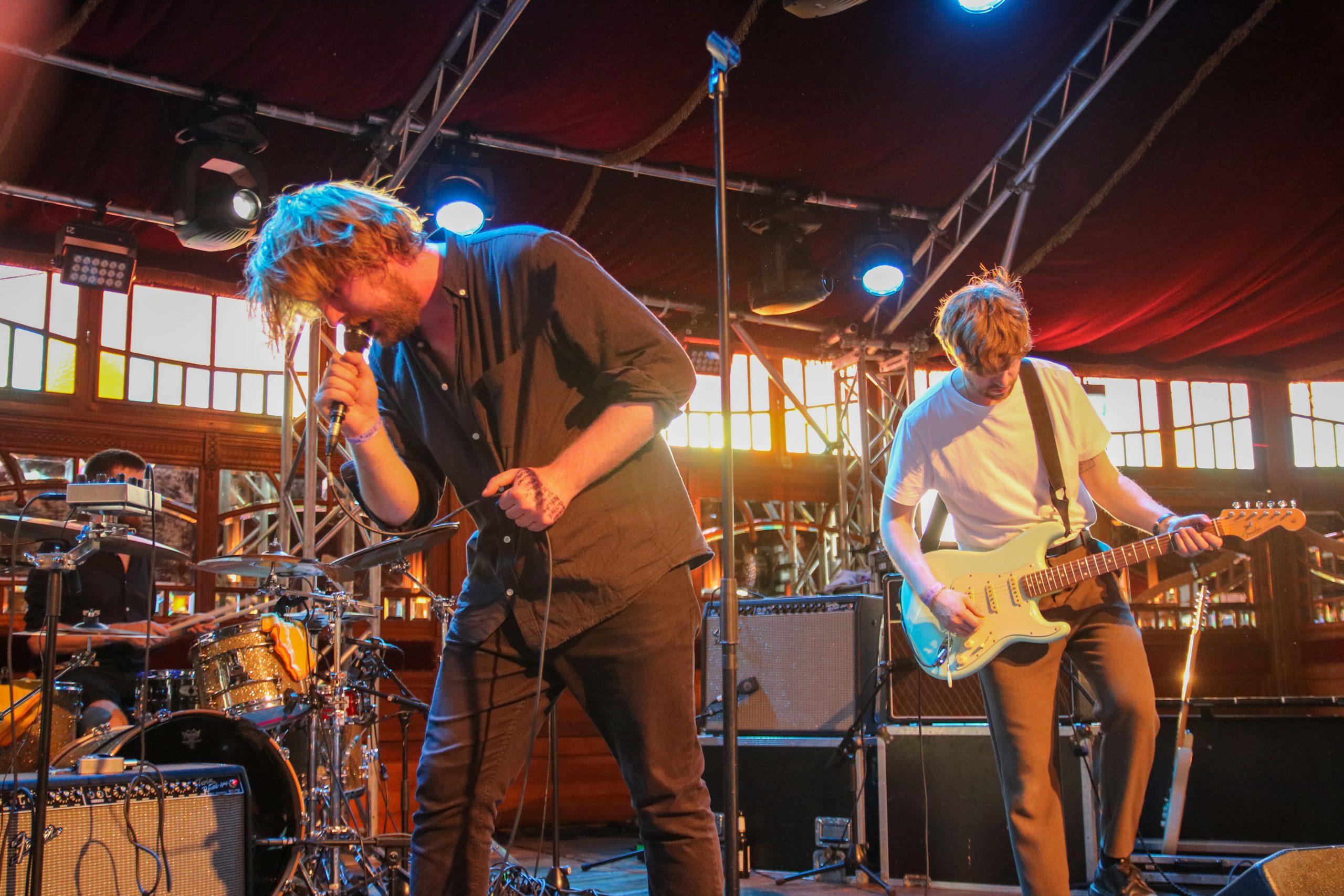 During their projection in the Spiegeltent, Midi Black evolve into a rolling electronic juggernaut, a distracting mix of sound-tuned digital screen swipes, or a gesamtkunstwerk of witty drops and asides that blend together to create glorious theatre; all carried by the trickster charm of frontman Geordie Grieg. Fuck knows: I have no idea what’s going on, but, like The Faust Tapes, once it starts, you have to go all the way.

The Quietly Heroic Black country, new road now lead another course. Much has been written about them, but they’re fascinating for reasons that sometimes escape us and there’s a real sense that they dig deep and pull things out of themselves that other acts can’t. Visibly melting in the glare of the Saturday sun on the main stage, BC, NR’s new line-up reveals another side to their music, which now has something of the Fairport convention of the Unhalfbricking era: a mix of folk, shanty, prog and mystique take on pop, all wrapped up in disarming sound stories. It’s their honesty and their openness – and their willingness to share these musical stories that they do, that’s probably the greatest thing about them.

What about St. Petersburg shortparis at present? Brazenly taking advantage of a chance to play western festival slots while the visas are there? Bravely employing macho, perhaps overly romanticized Russian tropes to subtly criticize Putin’s dastardly regime in the face of near-universal distrust and hostility? Maybe both. It must be very strange to be in a group that – like Laibach – seeks to overthrow the untruths and immorality of their homeland’s self-image. One minute they are praised for their ingenuity, now reviled. But these are difficult times and all Ukrainians have every right to confront any iteration of the empire that invades their country and tortures and deports their compatriots.

A protest takes place before the band embarks on a high-octane set, a set so loaded it feels like the sound is there to pierce the ozone layer. Everything seems pumped; the cymbals are knocked offstage, the wild dancing becomes particularly manic, and their trademark “total” electro-charged sound feels like it’s about to self-ignite. The rhythm cannot last and the end of the concert gives a little remorse with a few numbers at a slower tempo. I hope, perhaps naively, that when Putin’s regime is crumbled to dust and a new Russia emerges, it will be built up and reshaped into something more progressive and peaceful, by people like Shortparis. 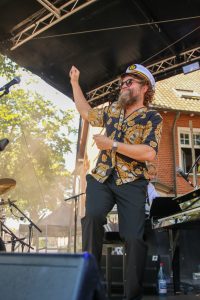 One of Haldern’s greatest charms is his sense of fun. The festival always manages to walk a tightrope between taking the world seriously and letting people have their quota of carefree abandon. Each year, a number of acts manage to bond chin-strokers and kebab-eaters with their shows. This year, the honors go to Extraliscio Friday on the Village Stage. Extraliscio are a remarkable Italian band playing a superb two-hour set in the best tradition of the Working Men’s Club.

Plenty of asides and jokes grease the wheels of an all-ages show that encompasses cabaret, disco, torchlight ballads, cheeky “adult fun” numbers, rock-infused songs and a sensational two-minute drum solo from someone who looks like he just left high school the week before. The fact that the conspicuously dressed and proudly shaggy singer obviously only knows Italian – or baits him insofar as we think he knows only Italian – makes the proceedings all the more magnificent. People, visibly reddened by the scorching midday heat, sway, cheer and bawl and pretend to be on the vine-strewn terrace of a tavern overlooking the Mediterranean. A triumph, as is their italosaunasingalong in the Niederrhein tent a few hours later.

The following afternoon TEKE :: TEKE take over to get people in the mood for the main program with an hour of wigouts that encompasses the Japanese psyche, easy listening, and a form of progressive rock that sometimes strays deep into Amon Düül 2 territory. They are absolutely fantastic. I will probably never see either of them again.

Closing of the festival on Saturday in the Spiegelzelt, wet leg deliver what is needed with their heady blend of their very moreish pop and rapscallion spirit; the music both utterly current and in tune with our own notions of the golden era of pop’s ‘chart sound’. Attractive.

Also a word for DJ St Paul, one of Europe’s most assured partystarters. His festival-closing set was a typically nifty mix of tracks you didn’t know you wanted to dance to and ones that have already framed memories of the weekend. Paul Nederveen is a real magpie; able to judiciously inspect and place any new sonic trinket at best. People cut carpets (read: kicked up topsoil dust) on the spot to the beat, and his oilseed set followed people as they fell to post-festival scenes of silly debauchery, fueled by the God of cheap vodka. Perfect.

All the words of Richard Foster