Jay Jay French, founder, guitarist and director of world-famous heavy metal institution Twisted Sister, spoke to Joe Rock in September about his book, Twisted Business. During the interview, found below, French returned to threats of legal action against Harkey-Davidson when it emerged that the company wanted to use the name Twisted Sister for a new line of motorcycle tires.

French: “I once got a phone call from a guy representing Harley-Davidson. call you to let you know we’re going to use the name and we’re going to call the tire ‘Twisted Sister’. ‘ And I said to him: ‘Are you really calling me to tell me that you are violating my mark?’. I was stunned. I said, ‘You really call me, telling me you recognize that I own the brand, you tell me you don’t care that I own the brand because you’re Harley-Davidson, with 400 million dollars in assets, and then you’re gonna call a tire ‘Twisted Sister’ and send me some tires as a thank you. That’s what you’re telling me, isn’t it? And he said, ‘Yeah.’ And I said, ‘Give me your numbers.’ I write down her number, hang up, and I’m just fucking livid.

I called back and this is what I said to him: ‘Hey, man, Jay Jay French. You know the phone number you called to reach me is 212. You know what that means, don’t you? I’m a guy from New York. In fact, I am a Jew from New York. So that’s exactly how it’s going to be: number one, I chased Six Flags and won, and they’re twice the size of Harley-Davidson. I sued them for three years and won. You should do your due diligence on this, as I removed Urban Decay as well. If you fuck me like that the first thing I’m gonna do is sign a band and call them Harley-Davidsons. I’ll send you some picks and a fucking thank you. ‘ He said, ‘How much do you want?’ I said, ‘I want 10% and two Fat Boys a year …’ and I hung up on it.

He called me back the next day and said, ‘We have canceled our use of the name.’ “

French recently published a “Bizoir” – part memoir (and essential reading for any metal fan) and part business primer – in Twisted Business: Lessons From My Life In Rock ‘N’ Roll, an unexpected, swirling, hilarious story and transformative of French’s life filled with adventures.

Co-written with Steve Farber, bestselling author and one of the world’s leading experts in leadership and management, Twisted Business follows French’s life from his childhood as John Segall on the Upper West Side of Manhattan in the 1960s. – using and selling drugs in Central Park West – quitting cold turkey after nearly fatal overdose, creating and cultivating Twisted Sister, turning it into one of the most successful brands in the world.

“I incorporated my life story into this mix as both an entertainment and a warning,” French says. “With my co-author Steve Farber, we seamlessly weave the story of Twisted Sister’s 50-year remarkable history (with many legendary stories never told before) into business lessons applicable to all professions and even life. in general. For the first time ever, the story of Twisted Sister’s rise, fall, and triumphant return is explained in startling and often surprising detail. 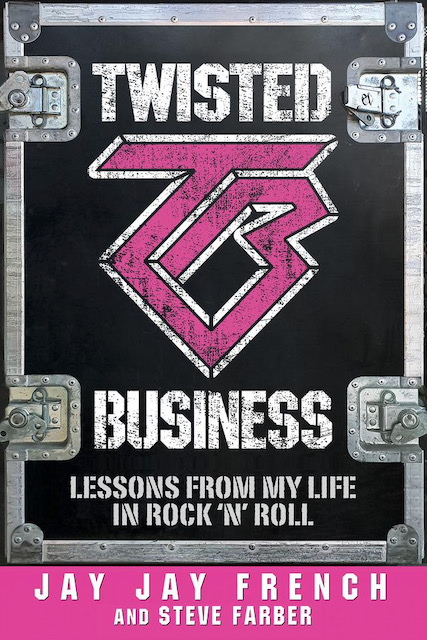 French offers honest, funny, heartfelt, and entertaining stories from the rock band trenches, along with unique, hard-earned tips and advice for anyone looking to build their own brand, reinvent themselves, grow a business, or just love it. that they do.

“This is a plan on how to survive and succeed in the face of the toughest obstacles in the industry,” he says. “The TWISTED method of reinvention (as described in the book) will help you turn roadblocks into paths, chaos into stability, and ultimately help you achieve a better quality of life both personally and professionally.”

French launched the internationally acclaimed Twisted Sister nearly 50 years ago and amassed 37 gold and platinum albums as a musician, manager, producer and executive producer while having performed over 9,000 shows in 40 countries. and sold 20 million records worldwide. A founding member of the Long Island Music Hall of Fame and co-star of the critically acclaimed documentary We Are Twisted F * cking Sister, he is considered a leading expert on vintage guitars and high-end music equipment. .

Although legions of fans know the French as the yellow and black guitarist of Twisted Sister, he also shines as a business leader who has developed Twisted Sister into a global brand with multiple revenue streams and made it into the world. one of the most licensed heavy metal bands in history. Host of the popular podcast The Jay Jay French Connection: Beyond the Music, French is also a columnist as well as a key motivational speaker who gives presentations to global Fortune 500 companies as well as non-profit organizations.

Twisted Business: Lessons From My Life In Rock ‘N’ Roll by Jay Jay French and Steve Farber is available now through RosettaBooks.