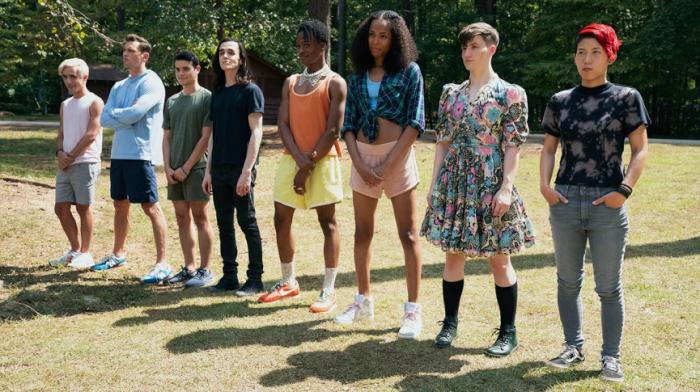 They they (you say They-Slash-Them) is not a good movie, and it’s very difficult to even start watching it without knowing it, mainly thanks to the fact that you can only watch the movie on Peacock, and Peacock oh so helpful displays Rotten Tomatoes dismal stats in the lower left corner. So you’re well warned by spilled popcorn, green splat, and low notes right off the bat. An annoying feature of the streaming service? Undoubtedly. But in the case of They theyit was helpful to remember that other netizens thought this movie was as bad as me.

The film, the directorial debut of prolific screenwriter John Logan, is set in an LGBTQ+ conversion camp in the middle of spooky woods. In general, They they is basically a goofy, unaware hodgepodge of homophobia and obligatory horror tropes dispensed by the bucket. An LGBTQ+ conversion camp is a pretty intuitive setting for a horror movie: a place that is fundamentally about destroying the vulnerable people who are forced into it. It’s the summer camp horror trope on all sorts of truly unsettling steroids. I’m sure there is a way to do it right. But it’s not that.

The campers as a whole arrive with varying degrees of self-loathing or revulsion towards the camp itself, as well as their horrible families for sending them there. All of the campers are young and attractive, assumed to be in their late high school or early twenties at the latest. Most have made deals with their horrible parents to “try out” talk camp to avoid further abusive consequences in their home lives (except Toby (Austin Crute), who swaps a week at talk camp). conversion for a trip to Broadway, which … is a bad deal).

Our main character is Jordan (Theo Germaine), a non-binary trans camper who stands up to counselors and snoops where they shouldn’t, uncovering the nightmarish fuel abuse the camp is rolling out. Alongside them are Toby, Alexandra (Quei Tann), Veronica (Monique Kim), Stu (Cooper Koch), Gabriel (Darwin del Fabro), and Kim (Anna Lore) as the core campers.

Kevin Bacon grabs headlines as the big bad, camp leader Owen, who alongside his creepy American-Gothic psychologist wife Cora (Carrie Preston) rules the camp with a smile almost as taxidermied as the heads of animals on the wall of his house. Owen comes in with a smiley welcome speech that’s meant to be disarmingly supportive, including little things like that, he’s got no problem with gay people, and if you’re okay with the way you are, then you you are welcome to live your life this way.

The camp’s methods are 99% gaslighting, and you can feel the narrative trying to paint a portrait of kids whose defenses are lowered so they can be well and truly decimated by the downright queerphobic trash spewed out by the “psychologist.” of camp. Kora. If there was more queer and bible bashing, Jordan comments, they would be less freaked out.

There’s also the gardener (Mark Ashworth) who spies on the girls in the shower as he sits among his unmotivated/unexplained collection of suitably creepy dolls. There’s a super hot lesbian activity coordinator (Hayley Griffith) who hits on a camper and eliminates Alexandra as a trans woman by spying on her (again) in the shower. There’s the super-macho, ever-super-gay, repressed camp counselor (Boone Platt) who’s a product of camp methods and thrives in a fake marriage. It’s as subtle as a rock on the head.

Logan is a screenwriter from whom I expected much more inventiveness. The man wrote Gladiator and the aviator, for God’s sake. We get flashes of that potential in the perfection of Bacon’s opening monologue and Cora’s “Nobody Will Ever Love You” therapy session with Jordan. It’s when the tone needs to change that it suddenly shifts from self-aware, open-arm acceptance to gender-essentialist hunter-gatherer pseudo-science without any transition. There are the overly harsh lines, like Alexandra volunteering to take on a difficult and insistent task (paraphrased): “I am a black trans woman. I could do it in heels. These people are less characters and more fetish objects to portray social problems. By the time the film is halfway through and the children are all experiencing predictable and degrading homophobic abuse, the story feels like it’s undermining itself. Yes, conversion camps are horrible. Yes, it’s super unpleasant to watch. It all feels like a cartoonish, indulgent game through homophobic and transphobic tropes without any narrative reward. The abuses continue to multiply. The children bond. ICT Tac.

It’s in the second half, when the physical violence escalates and the curtain is drawn, that the film takes a really bad turn. And in turn, I mean it goes full circle from trying to be a thoughtful commentary to becoming a dull, icky castaway.

The underlying logic of the movie turns out to be that the fairest and most correct course an abused person can take is to…smile/wince and bear it. Revenge is bad. The most “important” thing is to let the abusers continue to abuse as long as it doesn’t affect you. By the logic of this film, dealing with abuse is as scary/evil/upsetting as the abuse itself. Who not.

We had the potential here to create a horror film where the horror is the abuse of the conversion camp and the typical horror ax murders are the saving grace that saves the children from the plans of the camp. Where we are prepared to inflict violence but seek horror in the wrong places. Instead, we get a distorted moralizing narrative, violence is never the answer, ripe with misguided attempts at inclusiveness and openness that, much like Bacon’s opening monologue, are just as hollow and pretentious as they seem.