A few years before the 1976 film Taxi driver came out – with its raw portrayal of New York at the time – another “hack” was on the road trying to figure out its future, this one more musical in nature.

And in the 1972 world of hard rock, glitter rock, and early punk and new wave, commercial motorist Tim Hauser was really into… four-part vocal harmony. The kind of soft, smooth, sophisticated sound of blended, perfectly tuned vocals that hadn’t been popular in decades.

His previous band, the Manhattan Transfer (their name was taken from a 1925 novel by John Dos Passos) had split up after a few years together and released an album when he and bandmate Gene Pistilli had different musical visions. Hauser was looking to restart while doing odd jobs.

Luckily, one of his passengers was Laurel Massé, a tall brunette singer with similar interests. Another passenger invited him to a party where he met the smaller and braver Janis Siegel, already in a vocal harmony group. Massé’s boyfriend was a drummer in the band for the Broadway production of Fat and introduced the trio to Alan Paul, who boasted matinee idol looks and a crooner crooner who served him well on stage as “Teen Angel”.

The four clicked immediately, and on October 1, 1972, the new Manhattan Transfer was born.

“That was the thing. It was an amazing time to be in New York. There was so much freedom in the music. And the whole concept was to do this close harmony in four parts. That’s what we focused on,” Paul says today via Zoom, with a poster of Count Basie visible in the background (the members’ hearts desire was for their vocals to replicate Basie’s saxophone section: soprano, alto, tenor and bass).

“We didn’t want to do what everyone else was doing. What’s the point of that? Paul continues. “We all had this love of harmony close to bands of the 40s and 50s and Big Bands like the Pied Pipers, the Modernaires and the Merry Macs. We thought it would be unique. But most people don’t get it!
Over five decades, however, millions of fans around the world have “got it”. And the band will celebrate and put a period on at least part of its history with an upcoming 50th anniversary world tour that will double as a farewell ride. On September 23, they will also be releasing their Fifty (Craft), for which Paul wrote many liner notes.

A collaboration with Germany’s WDR Funkhausorchester, it “reimagines” 10 essential tracks from the band’s varied career which found them exploring not only vocal harmony, but also jazz, pop, big band, doo-wop, world music and even some experimental forays. . The lineup today includes original members Paul and Siegel, Cheryl Bentyne (who replaced Massé in 1979) and Trist Curless, who joined after the death of Tim Hauser in 2014.

“It was hard to announce it. And I haven’t even gotten to it yet because there’s so much going on,” Paul says of the farewell tour, which kicks off in October and will see the band playing almost 40 dates from time to time in the United States and Europe before ending in March of next year.
“Touring gets really tough, especially these days with the pandemic and being older. That doesn’t mean we’ll never do anything again, it’s just touring and especially internationally,” adds Paul.

Fifty’s genesis came from a January 2020 date when the band played in Cologne, Germany with WDR Funkhausorchester. It was so successful and appealing to everyone involved that plans for a recorded collaboration were launched. Then in March 2020, something, uh, happened.

“That show was so nice, and we thought we should do a project together. Then the pandemic hit and we put it aside for a year. And then we started talking again,” Paul says.

After working with arrangers and all parties involved primarily via online exchange of ideas, the orchestra dropped off its parts in Germany in April 2021, while the Manhattan Transfer sang in the United States in various sessions, like other musicians.
The result is a seamless recording that doesn’t sound like a Frankenstein. And the ten titles chosen from their discography include “Agua”, “The Man I Love”, “On a Little Street in Singapore”, “Paradise Within”, “Twilight Zone/Twilight Tone”, “Chanson D’Amour” and end with a cover of the Beach Boys “God Only Knows”, were not chosen by chance.

“The dossier looks at the major transitions that have happened for us in our careers,” says Paul. “We started with a list of 50 songs and whittled it down to ten. We didn’t just want to do the hits, but the songs that we really liked and deserved new orchestrations. And in some cases, new arrangements.

For fans, the visual image of the Manhattan Transfer that comes to mind – and more so in the early part of their career – is one of vintage elegance, with the gentlemen in tuxedos and the ladies in satin evening dresses. and jewelry. 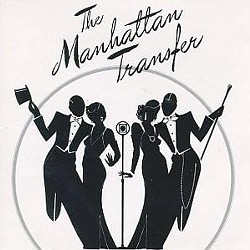 It’s an idea propagated by the band’s distinctive silhouette logo (which makes it the second version) that adorned the cover of their 1975 debut album and is still in use today. So it’s a bit shocking to see that in the early days of the group, their stage attire was much more colorful and extravagant with wigs, shiny costumes and bold makeup.

Paul explains that sister Hauser Fayette, who was a member of the avant-garde San Francisco-based troupe the Cockettes (and made up mostly of transvestites), shaped their original look.

“People were just coming out in jeans, and we wanted people to look at us, get their attention when we got on stage before we even opened our mouths. We had nothing to lose. We needed a manager and ‘a record deal,’ Paul says of the nearly three years between the brawl band’s founding and the self-titled debut album.

“With the logo, we always felt we needed it. It was like Coca-Cola, the brand image. And [Atlantic Records President] Ahmet Ertegun has understood this. He also understood musically what we were doing.

Even those unfamiliar with the band’s records have probably heard their biggest commercial hit: “The Boy From New York City,” which reached No. 7 on the Billboard singles chart in 1981. It was originally a success for Ad-Libs. after coming out in late 1964 and later, English band The Darts had a UK hit in 1978 with their version.

“We always dug it. There were conversations about it and we were working with [Producer/guitarist] Jay Graydon,” Paul says. “And Janis was great at it. She has been that girl from Brooklyn!
Although the farewell tour does not have a date in Texas, Paul says he is aware of the many fans the band has in the state and in Houston. In the late 1990s, the Manhattan Transfer performed a concert with an orchestra at the Woodlands Pavilion. Paul mentioned from the stage that the intense heat forced the band to call an audible, and they appeared on stage in clothes that were more comfortable and cooler than their prepared ceremonial clothes.

“It’s interesting what we do because our music is more urban in New York and then it became California,” he says. “So it got to us that a lot of people in Texas are digging us.”

Besides touring and recording, Paul stays pretty busy. He writes memoirs, has been working on a documentary about the band for about two years, hopes to return to the studio and even continue to teach and mentor young singers.

It’s bittersweet, of course, that the man who started the Manhattan Transfer’s journey out of the station isn’t there to celebrate the band’s golden anniversary. When asked what he thought his old friend Tim Hauser would have thought of the band’s history and position in 2022, Alan Paul pauses for a bit, emotion clear on his face.

“I think he absolutely would have like to be able to do it, but it just didn’t happen that way,” summarizes Paul. “I think he’s looking down. I think he is proud. And that’s really his legacy.

To learn more about Manhattan transfer, Fifty, and the farewell tour, visit ManhattanTransfer.net